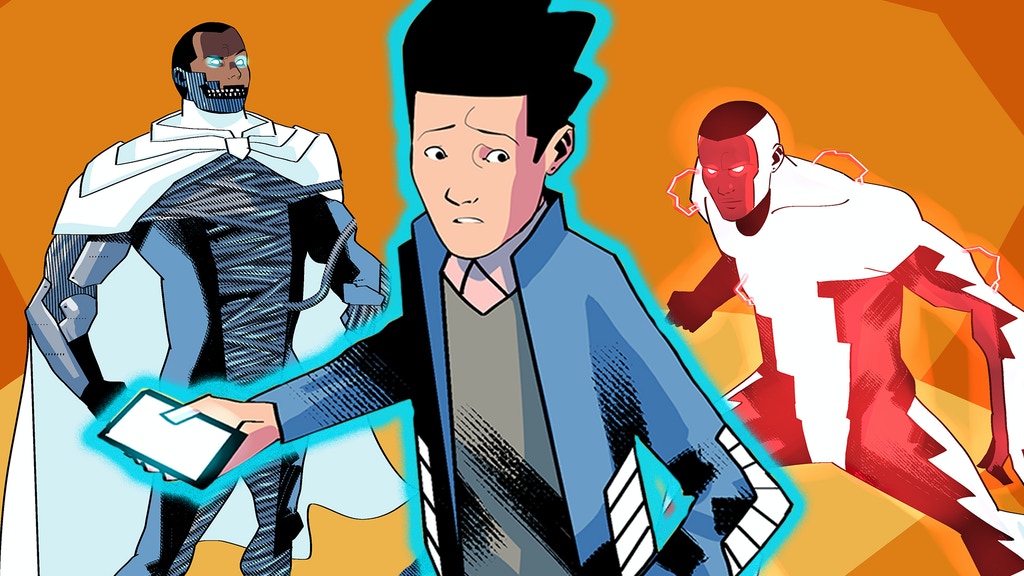 Latest Updates from Our Project:

We have some exciting news! Our wonderful printer COMIC IMPRESSIONS has the final files, and they are sending me proofs of the printed comic as we speak. Once those are approved, the books will be printed and one step close to arriving in your super hands!


Currently, there are ONLY 33 BACKERS who still haven't completed their survey.  And I hate knowing that we have super friends who won't get their rewards, so if that's you -- head here -- https://superbestfriend02.backerkit.com/ -- and fix that mistake ASAP!


***Also apologies for my delay on fulfilling the Script Reviews/Zoom Calls tiers, I'll be reaching out to those backers over the next few weeks to start scheduling things***


In the Meantime -- three of my awesome creator friends have launched new projects...

Ron Randall is talented creator, a great kickstarter mentor and a true powerhouse of crowdfunding. I've been a big fan of TREKKER for years, but don't take my word for this high quality book...

From his campaign -- Sci-fi bounty hunter Mercy St. Clair's quest leads to a deadly duel in the icy clouds of a remote, frozen world. 120+page graphic novel. Mercy's quest to resist the oppressive, system-ruling Council leads her to a remote, frozen world. There she finds new allies, faces old enemies, and fights a deadly duel in the frozen skies to determine the fate of the entire rebellion! Like every other book in the series, TREKKER: BLOOD IN THE WIND works as an excellent introduction to Mercy and her world. Each volume tells a complete adventure: Beginning, middle, and end. When you put the tales all together, they just paint a deeper, richer portrait of Mercy and her world. BACK IT HERE.

Fa Sheng is a death-cheating, mind-bending Shaolin Master… but he carved a long bloody road to get there. Fa Sheng’s story begins in the latter days of the 19th century when the propaganda and carnage of China's Boxer Uprising force him to reevaluate his purpose in life, to dedicate himself to helping those in need. It isn’t easy. Between Fa Sheng and his goal of enlightenment stand ruthless adversaries, backstabbing power grabbers and cowardly charlatans… any of whom would gladly dispose of anyone in their way. Authored by my friend, screenwriter, Rylend Grant, this is a book of high adventure, and highly recommended. BACK IT HERE.

LOOK AT THAT COVER! LOOK AT IT AGAIN! The wonderfully friendly and supportive KARL KESEL is back at it again for another issue of Impossible Jones. This series has been non-stop fun, and any fan of Super Best Friend is going to adore this book. Impossible Jones is a thief turned superhero, and each of her super powered guest stars have been a riot. The synopsis -- A story of GHOSTS… and other things that haunt us. DELUXE DOUBLE-SIZED comic by KESEL (King Shark, Harley Quinn) & HAHN (Batman '66). BACK IT HERE.

Hi super friends! If you have not already filled out your BackerKit survey (53 of you!), please do so by 4/14! We will lock the orders 24 hours after that so we can keep our project on schedule. If you don't fill out your survey, we will not have your addresses to ship, your Kickstarter Account name will be used on the Thank You page and you'll miss out on rewards.


If you are uncertain whether you have filled out your survey, or don't know how to access your survey, you can go here -- https://superbestfriend02.backerkit.com/ or email me on Kickstarter and I will happily send it to you.

In THE DARING DOUBLE LIFE OF ACE ADAMS, LA’s scandalous crime wave inspires two strikingly different heroes to spring into action. By day, the streets are protected by Whiz-Bang, a grinning, gregarious defender of goodness. By night, the City of Angels is defended by an entirely different kind of hero: The Black Dog appears in a cloud of smoke, a mysterious vigilante determined to strike fear in cowardly criminals. And unbeknownst to the mayor, the police force, the entire city…these radically different heroes share an incredible secret: They are the same man.

Scoop up the GRAPHIC NOVEL with George's Awesome Cover here!

The epic journey of the death-cheating, mind-bending Shaolin Master begins here, in a thrilling, all-new comic. Give them a FOLLOW and help them have a great first day when they launch later this month.

We're wrapping up that last bit of pages -- preppring them for the printer. So stay tuned for more news soon.

(This update is not an April Fools joke.)


We have officially sent out the all BackerKit Surveys to our backers! You should see an email in your inbox that looks a little like this...

The emails will be coming from "Jason Inman" so be sure to check your spam filters or make sure the correct email address is connected to your Kickstarter account.

We need EVERYONE to fill out their Backerkit surveys as soon as possible so we can get your correct names for the THANK YOU PAGE in our PDFS, and get all our item counts correct for the PRINTER!

(What happens if I miss the deadline?) -- I'm so glad you asked!

If you miss the deadline -- we will use your Kickstarter Account Name for the Thank You Page, BUT... we will not be able to send you any of your rewards until you complete the survey. So it's important to fill out that survey as soon as you see it.


And if you ever lose the link to your survey you can go here -- https://superbestfriend02.backerkit.com/ or email me on Kickstarter and I will happily send it to you.

Those backers have a @privaterelay.appleid.com email address and will need to reach out to the creator team or BackerKit Support to update their email address in BackerKit.

You'll be able to reach out to BackerKit Support by clicking the "need help" link from the Lost Survey page:  https://www.backerkit.com/are_you_a_backer

Please update your Apple Pay email as soon as possible to prevent this from happening in the future.


If you have any questions please feel free to shoot me a message on Kickstarter and I'll be happy to help you! And don't worry, I will pop back in here to send a reminder a few days before the deadline.


Excited to get Super Best Friend Issue 2 in your hands as soon as possible!

Cheers and have a great weekend

All the months of writing, prepping and promotion paid off thanks to all of you. Plus, I'm now super excited we get to complete our story in Super Best Friend #3! So, I can't say this enough, but THANK YOU.

Well, I'm going to take a few days to recover from the Kickstarter train and then... begin fullfillment.


Here's a rough schedule of how fulfillment of this project will happen.

THANK YOU SO MUCH ❤️!

We're currently 50 backers away from the next Backer Goal and you awesome SUPER FRIENDS just unlocked the Captain Terrific Electric Sticker. So what's the next STRETCH GOAL, you ask?

-- And just in case you're too young to remember Pogs -- seek out the wiki!

To get there in less than 48 Hours, we're gonna need some help. Share the campaign now. Share it tonight. Share it to your grandmother. Because you never know when someone will see Super Best Friend and they've never seen it before.

We have an EXCLUSIVE PRINT by Erik Burnham as a gift for everyone who supports both Super Best Friend and Aurora and the Eagle by my Jupiter Jet co-writer ASHLEY V. ROBINSON! You ONLY have 2 days when the campaigns cross over. I've read the issue and it's excellent. So don't miss out.

AURORA & THE EAGLE #1 (48 pages of fun Canadian superheroes) -- IN PRINT FOR THE FIRST TIME!

RAD KICKSTARTERS YOU SHOULD ALSO CHECK OUT --

The Iron Dragon is a stand alone comic book featuring Quick The Clockwork Knight. It starts as a 7” x 5” mini comic that you unfold as you read. As the story progresses, the comic gets larger and larger until it becomes an oversized 28” x 20” comic book experience at the climax of the story.

This comic book is printed in full color on a full newsprint broadsheet that is reminiscent of the golden age of Sunday newspaper comics (Little Nemo in Slumberland, Krazy Kat, Prince Valiant, etc.). Thane Frederick Benson is a an artist and writer best know for the comic books "Burnt" and "Quick, the Clockwork Knight." BACK IT HERE

Kickstarter Legend Russell Nohelty has launched a Kickstarter for the third volume and final volume of his awesome Lovecraft anthology, Cthulhu is Hard to Spell: Battle Royale, and you should definitely go back it ASAP! The third and final volume, Cthulhu is Hard to Spell: Battle Royale. features stories by Trina Robbins (the first woman to draw Wonder Woman) David Pepose (Scout's Honor), Christian Gossett (The Red Star), and a fantastic cover by Aaron Alexovich (Invader Zim), among many fabulous writers and artists.

In total, over 75+ creators contributed 34 incredible stories to this third 180-page hardcover collection, and the results are pretty mind-blowing. BACK IT HERE

A violent dystopian war meets a girl who bleeds memories. Told in stunning technicolor against a black and white world, this is the tale of a bygone life grasping for a chance to live again. November 2X66. A young soldier lies dead on the battlefield, waiting to be buried in a mass grave with her platoon. Victim to a cruel and unending war, the only mark of her existence is a memory–slowly bleeding out onto the rotted earth. It's by Fell Hound, a writer/artist known for Commander Rao and DYBIAA. BACK IT HERE


Until next time: THANK YOU FOR MAKING SUPER BEST FRIEND FLY HIGH! THE FINAL DAY APPROACHES!!!